Our story tells about three historical brand of Italian confectionery excellence. Three different paths – Elah, Dufour and Novi - linked by the same passion for quality, innovation and respect for the tradition.

The same passion that, in 1982, led Mr. Flavio Repetto to preserve, protect and fuel with his effort and foresight. 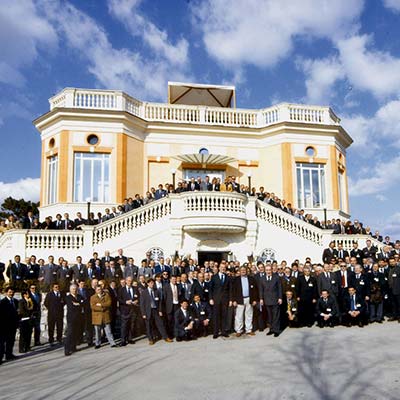 Giovanni Battista Gambarotta started a production and work cooperative between his father’s food-company customers. It was the beginning of F.I.C.C. (Fabbrica Italiana di Confetture, Cioccolato e Affini – Italian factory of chocolate, jam and related product ) specialized in the production of nougat and chocolate. 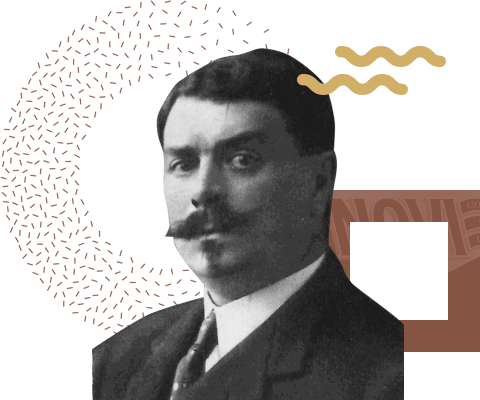 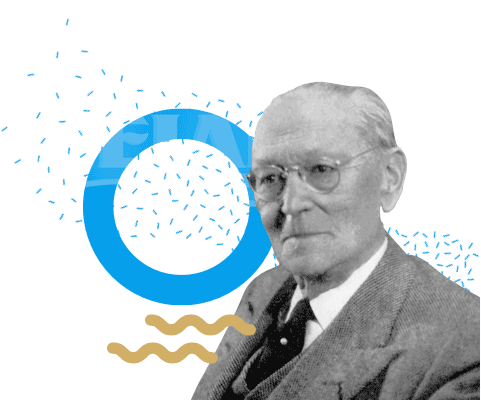 Elah Company was founded in Genova Pegli by the great Francesco Ferdinando Moliè, brilliant inventor of pudding and creamy dessert mixes, whose patent was filed by Mr. Moliè one year later. Moliè also designed a logo with a woman wearing an ancient dress while serving a dessert on a plate: this logo is still visible on Elah packages.

Moliè creates the “Mou” Toffee candy, named “Cubik”. The success was oustanding and forced Moliè to invest on a futuristic wrapping machine for candies: the English fabrication “Rose” machine brough the production from 80 candies per minute to over a thousand. 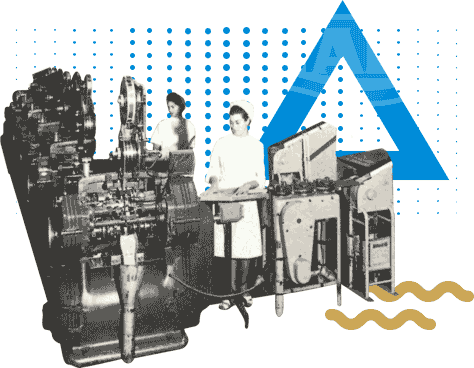 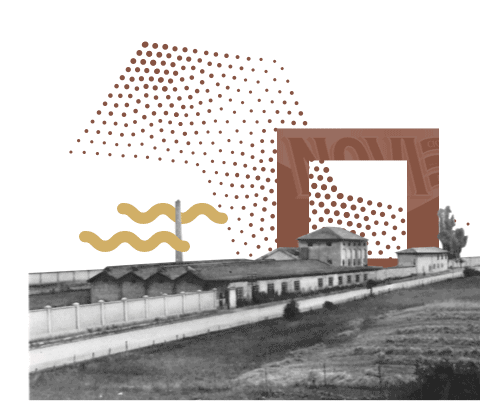 World War I affected the country, but the cooperative and human bond between the Company partners allows FICC to keep the employees while called to arms. The company corresponded the 50% of the salary to the married ones and 1/3 to the singles. This sense of belonging will last forever.

Elah is the first company to make chewing gums in Italy. The economic boom allows Elah to upgrade its plants and working force: the factory can now hire over 700 employees. Later in France, Moliè founds Kréma, another confectionery company, which will play a major role on the French market for decades. 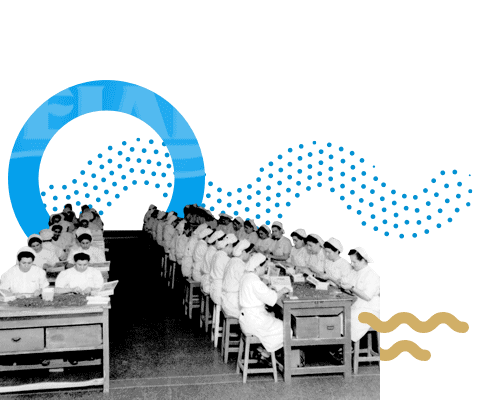 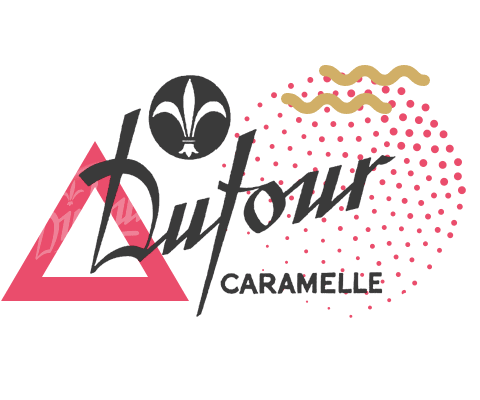 The public-limited “Fratelli Dufour” company - founded in 1829 by a french-origin Genoese family – begins the industrial processing of licorice plant and Mr. Gustavo Dufour rides the idea of making candies. From now on, the company will be recognized as “Dufour” and represented by the Dufour iconic fleur-de-lis which the French lily progenitor Laurent Dufour received in 1814 by King of France Louis XVIII.

Post World War I crisis hits the cooperative and cohesion is in jeopardy, but Mr. Giacomo Rossignotti – young manager with Taylor-like and Ford-like thinking – details a saving cost, development and investment plan which allows FICC to boost and keep growing. 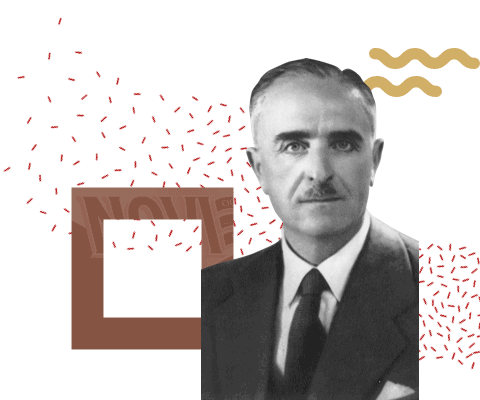 The inizial effects of the renaissance bring new partners in, brand new products and a constant research for innovation that push Mr. Rossignotti, the leader of the company, travelling to Switzerland, Austria and Germany to appreciate the greatest European confectionery plants. 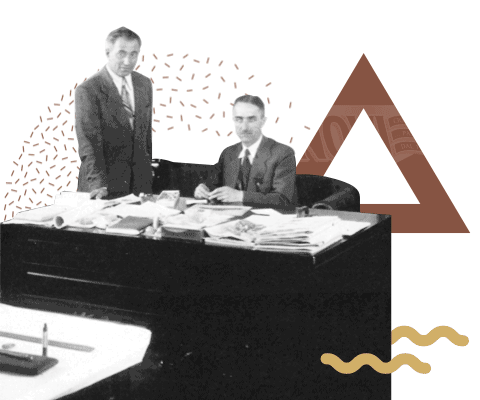 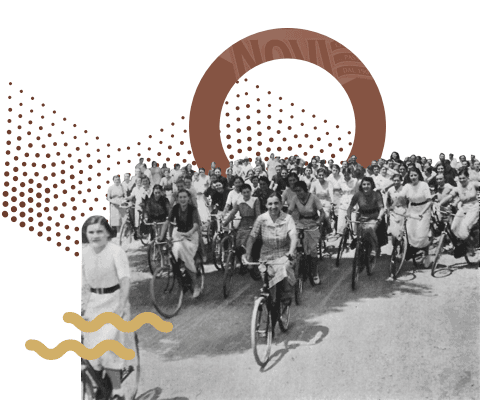 The turning point arrives when the Company is at its peak with 470 partners and needs a change to sustain this growth. The board designed and approved a new plant and the company changes its name from FICC to “S.A. Novi – Cioccolato Caramelle Confetti”: everybody already called it “Novi”. Like today.

The growth of dessert mixes is joined by the success of toffee candies, “Ghiacciomenta” and “Lancia”. Elah – first in Italy to approach new marketing actions – signs an historical deal with Walt Disney to market a candy named “Topolino”: the success is behind the corner. 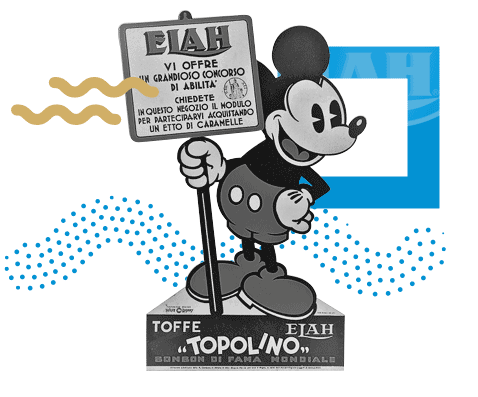 After one year of intense work, on October 28th the new Novi factory plant is opened in style. A 7.000 sqm of headquarters comes to life in the same spot where it is still running today: Novi company can now aspire to a brighter future.

Elah resumes production and penetration in the Italian market. Pudding and creamy dessert are the main pillars of the business. The exponential growth of toffee candies Kremliquirizia and Cubik, of Pallon Ball and Big Ball Bum chewing gums and the first candies distributed by vending machine help Elah to be known to all the families. 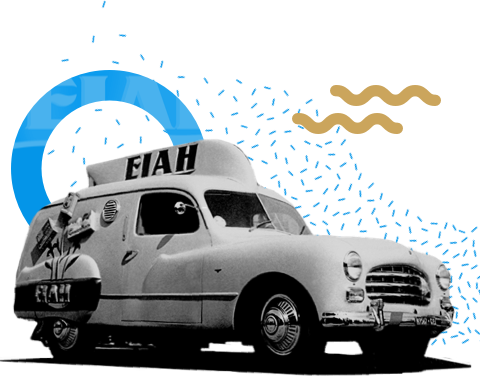 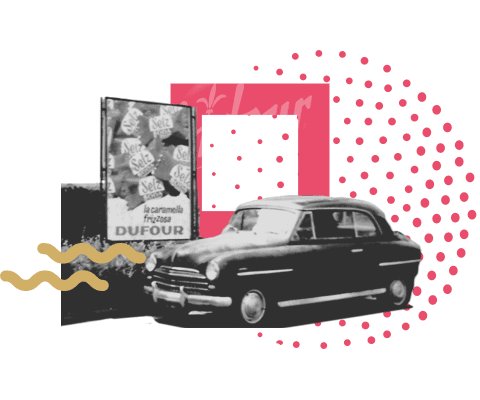 After Gustavo Dufour passed away, his three sons Jean, Alfonso and Alessio start leading the company, building a name on the Italian and international market thanks to new products and the first major advertising activities.

During the war, Mr. Rossignotti hides the machinery to prevent any stealing, buys new one and creates new products. Among them, the Novi team starts thinking to the first chocolate spread in pots, named “Pasta frutta al cioccolato Novi”: it’s the forerunner of Crema Novi. 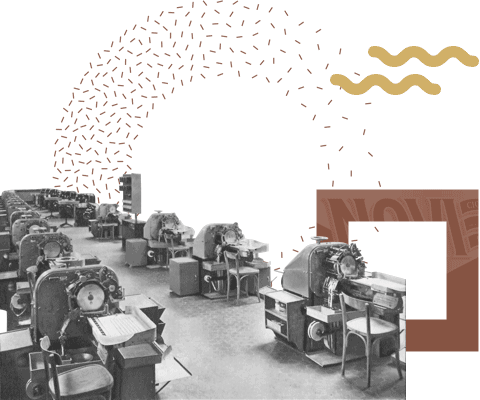 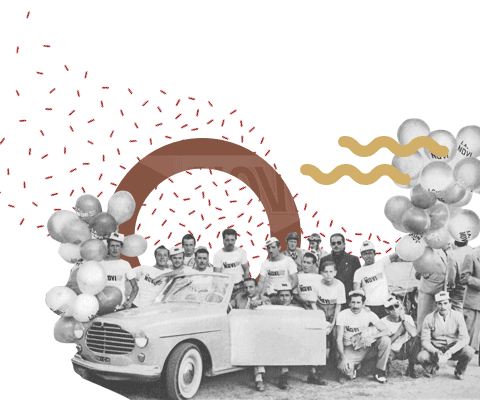 The restart is characterized by the first forms of communication, represented by Novi-branded Fiat vans, among the first in Italy. New advertising ways are explored with an important cycling event in Lanciano, in 1952, with the presence of Gino Bartali, one of the most famous Italian cyclyst in the history, which engages with Novi partners and fans.

Tonina Torrielli, a candy worker in Novi company, takes part to the Sanremo Festival, the most popular Italian song contest. Tonina is 20 and her “Amami se vuoi” song gets to the final stage. All Italy recognizes her as “the Novi Ligure candymaker”. Taking advantage of the success, Mr. Rossignotti unveils the “Tonina” candy and start distributing outside the Sanremo Festival theater. 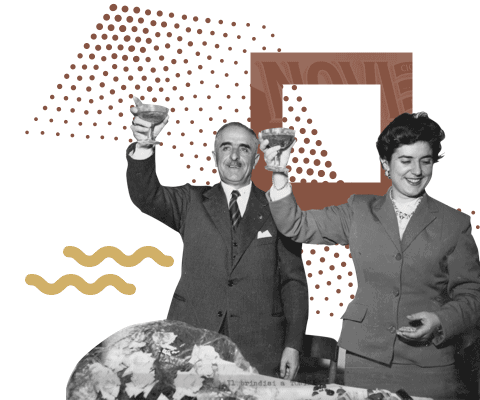 Italian families loves Elah as its products cover 10% of the entire candy market by producing over 6-million kgs yearly. “Carosello”, the most famous tv show at the time, hosts Elah first ad: actress Lauretta Masiero leads “Accadrà in futuro”, an advertising clip celebrating the desserts ready in “only 5 minutes”. 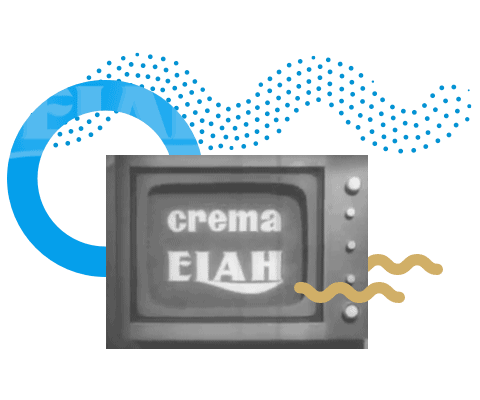 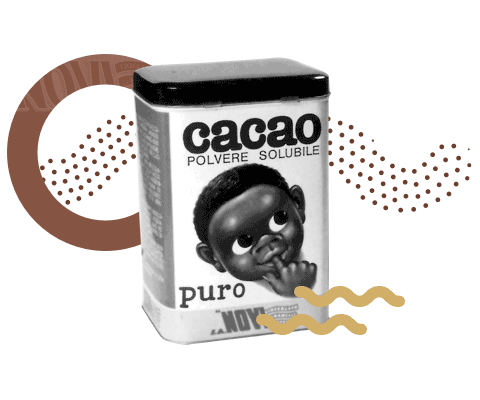 Confectionery market is growing 8% yearly in the 60s. Novi takes advantage of the trend thanks to its cremini praline, to “Block”, Gianduja chocolate, and “Nocciolato” bars and to innovation on product, packaging and size. The desire for expansion brings to light the first discussions between partners, so the work cooperative starts losing ground, sales and turnover.

Elah has been awarded with the “Packaging Oscar” for the creation of Cubik candy display cabinet. This award represents a further recognition to the quality of the product presentation by the Company, whose boxes will always takes part in the Italian history. 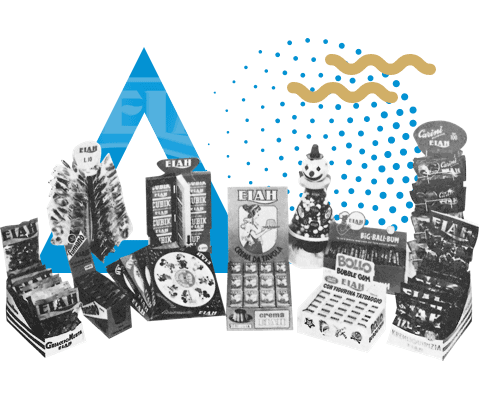 Crisis hit hard on sales and internal management. Elah company couldn’t do anything else than accepting an help from another company: Dufour takes over the capital share, so becoming Elah Dufour. 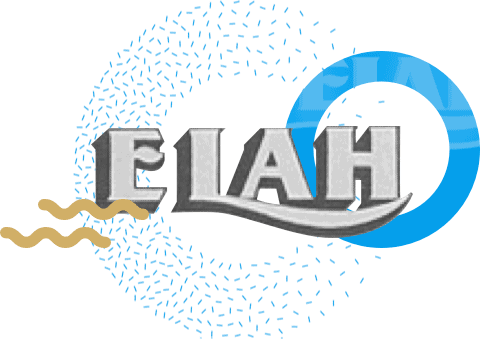 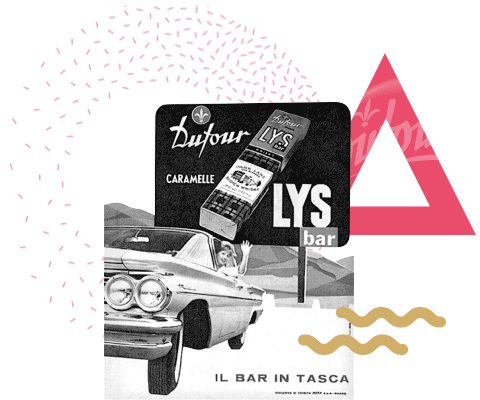 The Dufour Family quickly shuts down the other activities run during the years and focus only on Dufour candies product. In the same year, Dufour takes over Elah, fell in a management crisis: Elah Dufour is now a new company.

Novi can count over 300 product items among chocolate, candies, confetti and tablets. Gianduiotti and cremini praline are going great on the market, but the sell-out of the candies is falling down. On this landscape, work cooperative turns to be a weak model and the company - hit by the passing of Mr. Rossignotti – is clearly in decline. 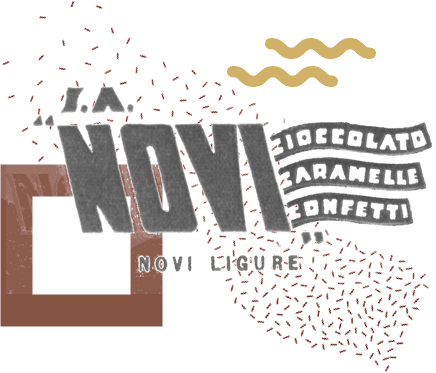 Mr. Flavio Repetto, successful businessman in the food industry, took over brands Elah and Dufour directly from Genova Bankruptcy court, together with the Genova Pegli factory and headquarters. Together with his son Guido, Mr. Repetto hires 240 out of 300 employees who were risking their job and relaunch both brands: it’s the beginning of a new era. 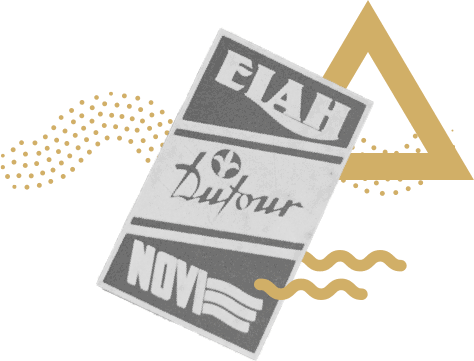 The Group add another piece on his way of a complete confectionery offer by taking over Novi chocolate, which was restructured on production and commercial side, and joined Elah Dufour. The whole offer was refined, representing chocolate as pure “food, and not as luxurty good”. This leads to the birth of 50-grams, 100-grams and 200-grams chocolate bars.

Novi won the audience with an iconic tv spot set on the mountains and a claim that will stay in the history of the Italian advertising and in the heart of all Italian families: “Svizzero? No, Novi!” (Swiss? No, it’s Novi!)

Novi plant and headquarters expanded itself by incorporating the Elah Dufour production set in Genova Pegli factory. The Company can now define its strategy on a linear choice: “Each brand, its own products”. Novi is the Great Italian Chocolate; Dufour is the home for high-quality candies; Elah is pure and simple delicacy, thanks to its dessert and cake mixes and toffee candies.

The Company, which also acquired “Biscottificio del Sassello” in 1990, l Gruppo, che nel 1990 aveva acquisito anche il Biscottificio del Sassello, takes the major role in capital stock at “Baratti & Milano”, historical confectionery company founded in 1858 in Turin. In addition to manage organization renewal and relaunch, our company will also be managing the “Caffè Baratti”, still one of the most exclusive, elegant and noble coffee bar in Italy, originally opened in 1875 in the heart of Turin.

Elah Dufour opens its branch “Novi France” with the goal of strengthen its presence on the French and European market. Actually, the company is focused on the development of pralines gamma and in the distribution of Crema Novi (“Pâte à tartiner”), which is worth about 80% of the French turnover.

The Company celebrates 100 years of Novi, the brand which Italian families recalls as the Great Italian Chocolate. The Italian market highlights that 40 out of 100 dark chocolate bars sold are Novi’s: an outstanding success that deserves to be share among any employee and collaborator. 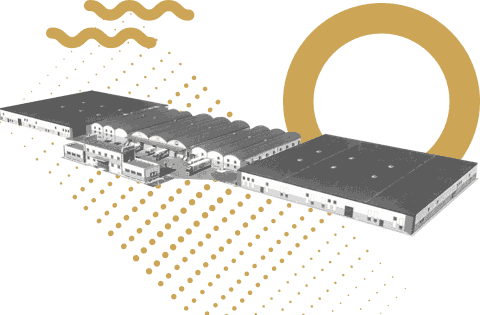 By enlarging the plant with other 12,000-square meters lateral warehouses, the Novi Ligure factory external modernization is finished. Everything began in 1992, by incorporating Elah Dufour: the whole production and headquarters site has now an area of more than about 60.000 square meters.

After achieving the chocolate bars leadership on the Italian market, the Company starts its plan to develop Crema Novi product. On of the historic Novi’s flagship, thanks to its unparalleld 45% of Italian hazelnut in the recipe, the creamy spread is at the core of massive advertising and communication investments. 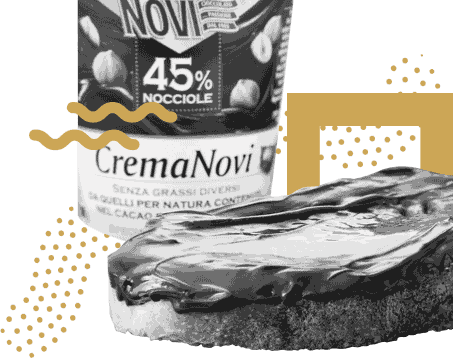 The installation of the new green-energy plant completes a 5-year energy-saving related investment plan. The Novi Ligure site is now quite autonomous and allows the company to save 1.700 tonnes of CO2 yearly.

Crema Novi goes on TV with its first-ever dedicated ad. The classic Novi jingle plays in the background to a story of lovely and sweet moments to live with family, at home. 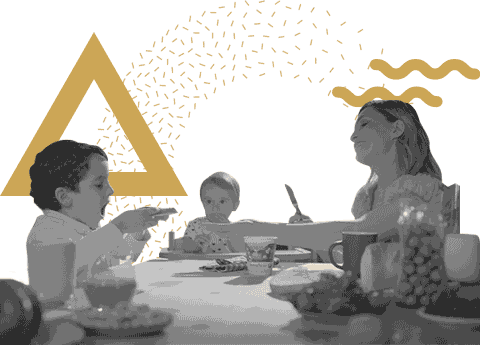 Watch the commercial
Novi
Il Paese più Novi che c'è
By continuing to browse, you consent to the use of cookies. This site contains technical and persistent cookies, including from third parties, in order to improve its use. To find out how to change your browser settings regarding cookies, up to and including their installation, click here.